This month, one of the books I promised to read was Ready Player One by Ernest Cline. It’s popular, of course, which means there’s a lot of either heartfelt love for the tale or burning hatred. It’s hard not to get taken in by one of the two camps.  I definitely fell more toward one side than the other, but I’ll let you figure out which on it is by reading on… 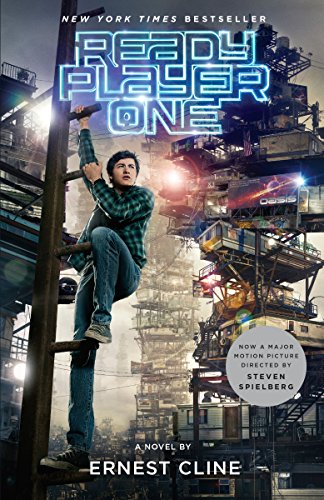 I borrowed it from a friend IRL and got a pre-movie printing.  The cover image presented here was the one on Amazon as of April 2018.

I got all the way through one chapter before I knew which camp – love or hate – I’d fallen in. I wasn’t alive during the 80’s, so a lot of the massive lists of references were lost on me. It was dreadfully hard to trudge through all that mess, and I found the decision to be so focused on pop culture minutiae… sloppy.  I did put forth the effort to ask Gen X’ers what they thought of the book, and many of them were very pleased with it.  I kept reading, and I have a theory about the heavy use of references.

I am a big Trek fan.  When the book mentioned the Kobayashi Maru test, I understood the reference.  I felt smart, and I felt a moment of camaraderie with the main character.  I imagine someone who is more involved with 80’s pop culture will enjoy this book.  I have heard arguments about the book being relevant to geek culture, but I’m not as certain that this is true.  There are lots of early video game references, but I think younger players are less likely to have played or be interested in a lot of the arcade games mentioned in universe.

To me, the book felt like it took the problem of ‘gatekeeping’ to book form.  If you weren’t already familiar with the plethora of detailed information, the book will shower you with so much new stuff that it’s nearly impossible to read for fun AND spend time looking up references.

If you start the book, get what Cline’s writing, and have fun from the get go, you will like the whole book. If you don’t like the first chapter – chapter 0 – you should probably stop right there rather than trudge through the first 80 pages of misery, then find the book to pick up only slightly.

As a whole, this book reminded me of a much cheaper, much more indie book: Void Forge, by Thomas Holden.  Void Forge is a bit rougher (well… a lot rougher) in terms of editing, but I thought most of the characters were deeper, the technology somewhat better explained, and the information not reliant upon the reader being of a certain age.  Not to mention, I’m also pretty sure it’s indie, so you’re supporting a fellow non-famous author.  I have a few complaints about Void Forge, but I liked it much better than Ready Player One and fondly look back to it every once in a while.

The plot follows Wade Owen Watts, a 17-18 year old boy/man who lives in a shithole of a future.  The planet has been wrecked by income inequality and global warming, and all children of his generation are doomed.  Luckily, a computer-generatefd, three-dimensional set of worlds called the OASIS allows every person on the planet to escape into a digital reality.

One day, the insanely rich creator of the OASIS died, and his fortune is to be given to a person who solves a set of 80’s themed puzzles.  Wade does so, but in the process he, his friends, and their in-game avatars are hunted by the notorious Sixers, a horde of company drones out to destroy the OASIS itself.  They survive periolous plots against their lives and go into hiding.  In the end, Wade manages to collect enough items, powers, and allies to wage a massive war against the Sixers and sneak through the final quest to find the Easter Egg reward and receive the fortune.

One of the main parts of the story was solving 80’s based puzzles, and I found the puzzles to be weak.  As a D&D fan, I solved the first puzzle myself long before the main character did.  Granted, I didn’t know about the computer-generated-world’s ability to do massive images searches over planets’ surfaces, but I did figure pretty early on that it was related to Tomb of Horrors and would be located at a school.

Because I had solved it so easily, I thought the premise that it had been 5 years since the puzzle had been published (but not solved) to be incredulous.  I didn’t get the following puzzles, but I’m also fairly certain this is because the trivia minutiae involved were insane.  Even following in-universe rules, I felt like there’s no way Wade could have lost to the company, and that kept drawing me out of the book.

The book made good use of Chekov’s guns.  The extra life from the Pac Man machine was excellent, and some of the information from Anorak’s Almanac did come back interestingly.  One had an issue, though: old fart Ogden Morrow could become invisible in the OASIS and travel anywhere, regardless of permissions, and early in the story knocked over a stack of comic books while invisible.  Later, he almost magically appears and solves the IRL problems of the main characters.  The intensity of the attacks by the enemy Sixers picked up significantly towards the end, and Og offered to bring the main characters to safety.  I found this solution to the problem to be incredibly cheap.  If space or word-length constraints were the publishing issue, plenty of room is available to slash at the beginning.

Beyond poor believability and the issue with Og, the plot was pretty standard.  Nothing that happened really left me feeling like it was a good twist (well, only one twist mentioned later in the review), yet nothing happened that seemed like a drastic mistake.  Cause and effect mostly made sense, and I didn’t notice any glaring holes.

The main character felt like a combination of a douchebag and a Mary Sue.  Every time he failed, it was because he moped around about himself and the loss of his favorite female’s attention.  All of these girlfriend problems got in the way of the story, but without them, Wade would have felt unstoppable and… insufferable.

Speaking of the girlfriend – Art3mis is a piece of shit character.  Whenever you describe someone boobs first and focus on their body’s appearance throughout most of the book, then fail to give any real on-screen action, they’re going to be flat in every dimension except that aforementioned chest.  While Art3mis is presented as competent, the other characters fail to listen to her and never need her to drive the plot (except by causing Wade to mope).  I find her character a drastic failing of the book.

That being said, let me contrast her to Aech – the other ‘female’ character in the book.  I keep that in quotes because Aech chose to parade as a white male in the OASIS, and even after discovering the IRL identity, narrator Wade chose (without asking Aech) to continue using ‘he.’  It may have been appropriate with Aech, but it wasn’t clear and felt really awkward.  The way Aech’s identity was revealed and subsequently forgotten left me feeling like it was thrown in absolutely last minute to gain some token diversity.  Making Aech gay really felt like a moment to explain away the times that she felt like a mirror of Wade earlier in the book.  Aech was an ok character, but there really wasn’t much there to judge her (or him) on.

As a whole, the characters seemed pretty weak to me.

The strength of the book is in the fun, rompy flavor and intensely well-researched backdrop. The idea of a shitty future isn’t new, but just how deeply the next generations of people delve into a computer generated universe is a good element of the book.  The Internet-inspired world of the OASIS is detailed, rich, and absolutely enormous.  I wouldn’t be surprised if Cline’s next book takes place in the OASIS, or if there are follow-ups to Ready Player One.

The setting was good enough that I would probably be willing to check out further works.  With a new character that didn’t hold the obsession with random references, the rich, massive world that Cline created could be incredibly fun.

Next week I’ll be reviewing ECHO!  I’m flying through it, and I can guarantee you that I like it better than Ready Player One.