Last week, I talked about reading Shards of Honor, one of the first books in the Vorkosigan series.  It was straight up fantastic, and I truly suggest reading it.  I decided to follow it up with the next Cordelia book, Barrayar, which is highly celebrated (and was actually the book my best friend thought was one of the best in the Vorkosigan Saga).  After this, if I choose to continue, I will need to read some of the Miles Vorkosigan centered stories. 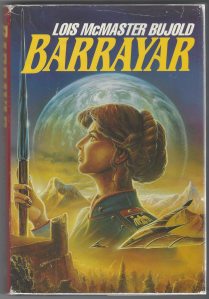 Author: Lois McMasters Bujold
First published in 1991
Published by Baen (though much, much milder than most Baen stuff)
Amazon Link

This was a pretty good book.  I think I liked Shards of Honor better, but Barrayar was definitely worthy.  I can also see why it was more highly awarded – it goes much deeper into social aspects of the characters and doesn’t delve so intensely into action (except at the exciting last third of the book).

In the end, I think I liked this story.  However, it took me a lot longer to get into this book than it did for me to get into its predecessor.  The book spent a lot of time establishing the culture of the planet Barraryar, and it had a horrifying amount of information about the woes of pregnancy.  I will probably sound coarse and brutish for saying it, but I really, really didn’t like reading so much about pregnancy in my sci-fi action novel.

Which, of course, the book had plenty of.  Cordelia may have been pregnant for about half the book, but as soon as that drag was over, she went right back to the inimitable badass I grew to enjoy in Shards of Honor.  The book finished very strong, and I think even the first half was made worthwhile by the awesome second half.

Probably my biggest complaint after having finished Barrayar was that I didn’t think it needed to be sci-fi at all.  Change the fetus Miles Vorkosigan into a small child and you could essentially have the same story set in a medieval time.  McMasters Bujold is often praised for how she gets away with the swords in space stuff, but I wasn’t a huge fan.  She has good excuses, but they’re not that good.  The sci-fi elements weren’t necessarily tied to the story, and that was a major disappointment.

The mystery of Barrayar wasn’t very deep.  You knew, almost immediately upon meeting him, that Vidal Vorbarian was going to be the enemy in this book.

What you didn’t know, however, was that Cordelia would sneak off in the middle of the night with her two most trusted guards and BEHEAD THE GUY.  After spending so much time just languishing about pregnant, angry, and leaving me wondering why the book wasn’t following her husband, Aral Vorkosigan, Cordelia totally came through in a big way.

The thing about this book is that you need the front end with all the bits I didn’t enjoy in order to feel deeply about the awesome back end.  I had a hard time getting started with this book, but I 100% do not regret it.

I think McMasters Bujold probably did a fantastic job with the Miles Vorkosigan books as well, but… well, that looks to be a more daunting task to undertake simply due to the sheer volume of writing about him.

Next week, I’ll be reviewing a non-Vorkosigan book: Rendezvous with Rama.  It’s another one of those works that I’m surprised I never read.