Something I’ve done in the past was try to catch up on the mass of classic sci-fi that I inevitably haven’t read yet.  This month, I continue the goal of reducing my ignorance by reading some of the works that continue to inspire and amaze. 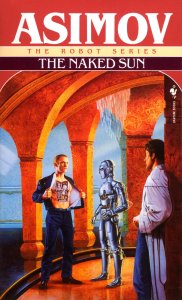 Asimov is usually one of my favorites, and I enjoyed both i, Robot and Caves of Steel.  This third (or second, if you don’t count i, Robot) installation is the last of the Robot series written by Asimov in the 50’s and, as such, I suspect it’s his last good one (I didn’t like when Foundation went off the rails, and that stuff happened when Asimov got older and did a cash grab).  I look forward to this murder mystery. 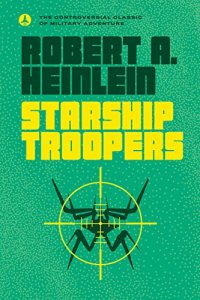 In November 2018, I read Stranger in a Strange Land.

It’s now one of my least favorite books.  EVER.  I powered through it, but I wanted to DNF it so many times that I entirely regret making it to the end.  I hated everything about it and I will not get those hours of my life back.

But my father-in-law insists that Starship Troopers is different.  Now, my father-in-law may be a weirdo, but he’s definitely not the kind of weirdo that would like Stranger in a Strange Land.  In that case, I assume Starship Troopers may give me the fairest way to assess Heinlein’s legacy without writing him off entirely as ‘author I don’t enjoy,’ which is what I did to Frank Herbert after I read Dune (which, while fantastically detailed, I found horribly unscientific and gut-wrenchingly stupid from a social aspect) and The White Plague (same issues, but more poorly written).  So here’s my second, potentially final, shot at Heinlein.

I saw things about this book when I read Solaris last year.  It’s supposed to be about a language that, by the sheer act of knowing it, turns you into a traitor.  Now, I’m not sure what that means exactly, but it sounds super cool and I’m all in when it comes to weird sci-fi right now.  I also hadn’t really heard of this author before (someone just gasped and unfollowed me, I know), but now I’m going to fix it!

The Leftovers: Something from YOU?

Do you have a published book and a method of purchasing it that isn’t sketch as hell?  I have a few slots left for indie books that I’m reading this year!  Let me know if you’ve published a book on a non-sketchy site (I do Kindle really easily) and I’ll see if it’ll fit my needs!  You may get a pleasant surprise!