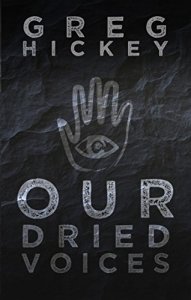 Ultimately, I was going to read this book because I was requested to do so and it was in a genre I like. When this book came across my lap, at least, I was in a place where I wasn’t getting enough requests to really put me off the trail. That being said, it’s a dystopian future sci-fi, and I’m ok with that.

This book is billed as inspired by classic sci-fi like Wells’s The Time Machine or Huxley’s Brave New World. I absolutely agree that if you like The Time Machine, this book is probably up your alley. Our Dried Voices takes a similar idea from The Time Machine – i.e. that humanity will collectively devolve into helpless, mindless creatures kept safe by old humanity’s successes – but there’s plenty of new, different ideas that you won’t be bored.

If you’re looking for a more modern comparison, I’d like to point you to Liu’s Three Body Problem. Hickey’s Voices is similar to Three Body in that it’s an extensively explored setting that builds with slow exactitude to its final reveal. Liu’s book is probably 4 times the size of Voices, but there’s a lot of explanatory shpiels that build on each other. It’s got that classic sci-fi “boring” to it that I and many fans of the old stuff enjoy. At times it did get excessively dry, but the book was short enough that it didn’t become too tedious.

Another good point in Voices’ favor is the high-quality editing. Though at times the book did fall into purple prose, the sentence structure, spelling, and logical flow of the book was good. I hate that this is something I have to grade in indie books, but I am happy to say that this one did it right!

The reasons this isn’t five stars, though…

This book, like Brave New World, is what I would call “artsy fartsy”. It has a semi-experimental structure wherein the characters say very little. Without much dialogue, it was hard for me to really get into Sam or Penny as fast as I wanted to. I could see what kind of feeling (a sort of “awakening” where the mains go from ignorant to curious) this sort of narration achieved, but it made it somewhat difficult for me to get into the book. They were inoffensive, perfectly fine characters, though. Penny was never an object, and by the time I figured them out, her role was well defined and well done.

The mystery elements were also not quite up my alley. Some of the mystery was easy enough that I questioned what the main character was thinking, some of it was a stretch even after it was explained, and some of it didn’t make sense how the character put together the clues.

The plot was relatively simple, and most of it could be guessed, but that’s not something you really have a problem with in sci-fi. It did build logically, and for that I commend it.

However, I must say that the bulk of the chapters were similar to one-off MacGuyver problems. Some of them – like fixing a bridge – were somewhat interesting, but others – like the “food box” where they collected the humans’ food to fairly redistribute it – was frustrating. Other problems didn’t make so much sense, but they tended to contribute to the overall plot.

As I said in the non-spoilers review, there was a mystery element. In the course of solving problems, the main character Samuel came across messages from a mysterious, possibly villainous, personages. While it was a clever idea, I thought these messages weren’t incorporated very well. They seemed a bit of a nonsense puzzle on top of all the other survival puzzles.

It’s time for the last of my indie sci-fi reviews – Dust & Lightning!